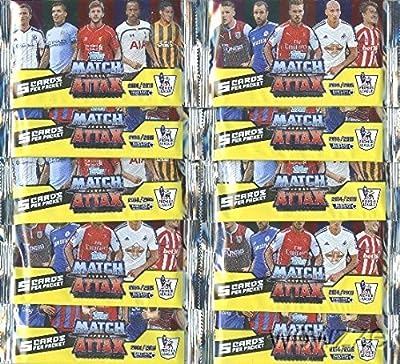 Wowzzer! Imported from England ! We Are Proud to offer this Awesome Lot of TEN(10) 2014/2015 Topps Match Attax Premier League Soccer Factory Sealed Foil Packs! Each Foil Pack includes 5 Cards for a Total of 50 Cards! Match Attax cards are both a soccer trading card series and a collectible card game produced Topps Europe in England! This are the officially licensed 2014-15 English Premier League cards. As always, these cards are a huge hit in Europe. Look for all the World's Biggest Soccer Superstars who play in the Premiere League!

Collect all 459 cards of the entire Series, comprised of 340 regular player cards (17 cards from each of the EPL's 20 teams) plus 119 randomly inserted "metallic" chase cards, consisting of 40 "Man of the Match", 30 "Record Breakers" (past and present stars), 20 "Duo" (two players per card), 20 "Team Badges", 5 "Tactics" and 4 "Hundred Club" cards. Collect Cards of all the Biggest Soccer Stars in the Premiere League including Mesut Özi,Steven Gerrard,John Terry,Luis Suarez,Wayne Rooney,Frank Lampard,Eden Hazard,Robin Van Persie and Many More!

Check out our Amazing Prices and Large Selection of Factory Sealed Boxes, Sets, and Singles of MLB,NFL,NBA, NHL,Soccer and More! We also have a HUGE Selection of BCW and Ultra Pro Supplies! Plus be sure to check out our Super Popular Amazing Beckett GGUM AUTHENTIC GAME USED MEMORABILIA GRADED Cards!