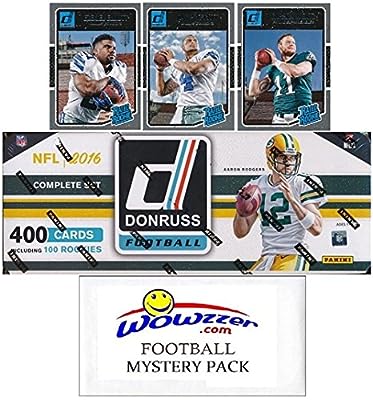 Wowzzer! We are Very Proud to offer this Amazing Brand New 2016 Donruss NFL Football EXCLUSIVE Complete Factory Sealed Factory Set! This MASSIVE Factory Sealed Factory Set has 400 Cards in MINT Condition including ONE HUNDRED (100) ROOKIE Cards! Plus as a Special Bonus we have included with this Factory Set a VERY SPECIAL Sealed EXCLUSIVE WOWZZER MYSTERY PACK that includes an Authentic Football AUTOGRAPH or MEMORABILIA Card! Who knows what Cool Autograph or Memorabilia Card you will pull from this Pack?

What Makes this Set Absolutely Legendary is the INCREDIBLE Collection of NFL Hall of Famers and Future Hall of Famers Featured in the Set! Including Joe Montana, Barry Sanders, John Elway, Brett Favre, Emmitt Smith, Peyton Manning, Joe Namath, Bo Jackson, Dan Marino, Gale Sayers & Many More! PLEASE NOTE- There will be NOT be any Topps Football Products Issued in 2016 Since Topps NFL licensed has Expired. As far as we know this is the ONLY Football Factory Set that will be released in 2016! This Factory Sets appeals to all Football Fans and Card Collectors Alike! This Set Makes the Perfect Gift

Compatible with iPhone 8 Plus Screen Pro...