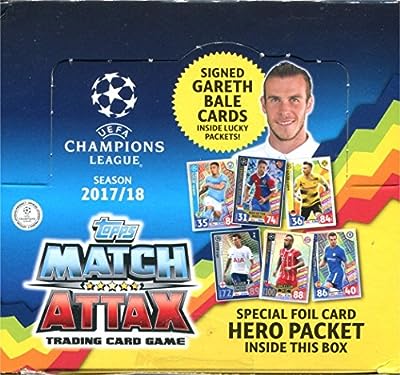 Full box of the JUST RELEASED 2017/2018 Topps CHAMPIONS LEAGUE soccer cards. Known as "Match Attax", this is a both a soccer trading card series and a collectible card game by Topps Europe and are officially licensed by UEFA. This box contains 50 packs of 9 random cards each (450 Cards total). EACH BOX CONTAINS ONE SPECIAL HEROES PACK,in which all of the cards in the pack are scarcer cards. Topps is now the exclusive producer of Champions League cards (replacing Panini). These cards are in ENGLISH.

This product features players from 22 of Europe's top club teams. Also, this product has very limited distribution and is unavailable in many major countries. It is "on fire" worldwide. THESE ARE CARDS, NOT STICKERS.

The entire series consists of 446 cards, comprised of 294 base player cards and 152 randomly inserted "chase" cards. .

As with all trading card products, CARDS ARE RANDOM WITHIN A PACK AND BOX.